When I first heard about the work of EFA Morocco, I wanted to volunteer. I was already captivated by Morocco as a country. I was as delighted by its obvious charms as I was fascinated by the tensions and contradictions inherent in its history and culture as it tried to be a modern, forward-thinking country and popular tourist destination, whilst at the same time defined by centuries of tradition and social norms, including the lack of education for the very poor, largely illiterate, Berber population and the place of girls and women in that society.

The idea that I could volunteer for EFA and make a difference to the lives of some of those girls was enormously appealing to me. What I didn’t know at the time was the difference that those girls would make to my life.

I arrived at Dar Asni open-minded and willing to learn, but I had expectations. I expected to teach the girls, mostly English but also French, and to help them with their homework where I could. I expected to broaden their experience of the world by bringing an outside perspective into the house and sharing insights into my life and family and how people live and behave outside of Morocco. I expected to set an example of how an education would offer them choices in the future, and how an educated young woman might live and succeed independently, if she wanted to.

These were fair expectations, both of myself and of what the EFA volunteer programme offers the girls through each volunteer that comes into their houses, and I believe they were all met. But the unexpected outcome was what I learned from working with those bright, funny, inquisitive, respecful and hardworking girls at Dar Asni.

The girls were incredibly eager to learn. They wanted to make the most of the opportunity that they had been given and appreciated the importance of what they were doing. It was amazing to see some of the older girls beginning to question and challenge, growing in confidence and independence, beginning to recognise and understand some of the complex issues facing women in Morocco and beyond. At the same time, they displayed great respect for their families and culture, even where their burgeoning ideas may have begun to conflict with those of the generation before them. And they welcomed me as their sister, this white English woman who had never really wanted for anything and couldn’t have been more different from them in so many ways.

(I also learned that teenage girls are teenage girls the world over. This may not be the most profound insight, but it was a revelation to me. When we decided to throw a party for the girls one Friday night, they spent hours getting ready, swapping clothes, fixing their hair, choosing their prettiest headscarf to match their outfit, and giggling the entire time. And they love their Berber pop stars!)

After four months at Dar Asni, it was incredibly hard to leave my Moroccan sisters. Without knowing, by simply being themselves, they had taught me about my own identity as a woman and given me greater courage and confidence in that identity, inspired by their example. Interacting with the girls and their families, and understanding the importance that is placed on the family in Berber culture, I also came away with a renewed sense of commitment to my own family and a deeper appreciation of the bonds we have between us.

The other lasting impact on me has been a steadily increasing determination to use my easily-won education to make a greater difference in the world. I have had the privilege of lifelong access to learning that I have too often taken for granted. Since working with the girls at EFA Morocco, I have felt more inspired and motivated than ever to use the fantastic opportunities I have so freely in front of me to work for the good of others. 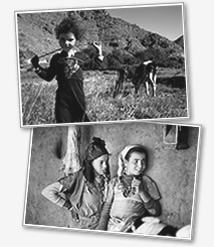